Deborah Abela’s hands-on writing workshop for WriteLinks on 5th August, 2017 inspired so many writers, that many bussed, trained and carred home to rework their opening paragraphs. Others who attended critique groups shortly after, saw part of their peers’ works anew. Abela, former teacher, Cheez TV writer and author of 25 books was courageous admitting her doubts about her writing ability. Audible sighs of relief signalled the audiences’ appreciation for her candidness. Abela’s 15-year writing career saw her share the ‘big things she knows now about writing for kids’. Abela exudes an energetic passion that spills onto her audience, motivating writers to share their class work. 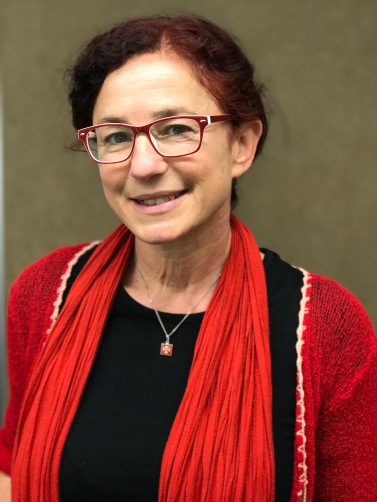 Abela’s first big tip. ‘Your first chapter has to be short, sharp, solid, fast. It’s got to grab your young reader. It’s got to almost have a beginning middle and end, and a cliff hanger at the end. You want to hook them… hold them and keep them reading.’ The first lines were critical to hook the reader. In positioning herself as a ‘reader’, Abela role played asking questions after reading Gleitzman’s opening lines.

Morris Gleitzman’s Once — ‘Once I was living in an orphanage in the mountains and I shouldn’t have been. And I almost caused a riot. It was because of the carrot.’

Abela as reader, ‘What do you mean you’re living in an orphanage and you shouldn’t have been? So are your parents still around… or not still around? What do you mean you almost caused a riot? And what… does a carrot have to do with anything? Morris has that beautiful balance between the very very serious and a lovely note of comedy.’ After further examples, her audience were keen to write and share their first paragraph for Abela’s feedback.

Kids to Lead the Action

The basics of writing for kids, ‘it must be kid-focused where often kids lead the action with maybe an adult nearby.’ Often Abela gets rid of the adults ASAP or sidelines them. She found the easiest book to do this was in Grimsdon where she flooded an entire city, rescued most of the people, took them somewhere else but left some kids behind. ‘The kids could do whatever they wanted. They didn’t have to be home for bedtime or have to explain the broken bones because they’d been on an adventure hanging from a plane.’

Abela regularly questions her motives for writing and encouraged others writers to do the same. ‘Why am I writing? Why am I writing this particular piece? Is it because I’m excited… Is it a period in history I love? This story won’t leave me alone… it’s driving me nuts… I wake up at 3 in the morning… can’t get the characters out of my head.’ Whatever your why, a passionate answer will see you committed to your project. 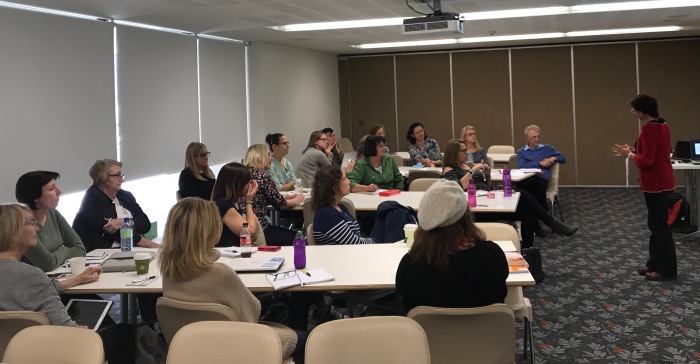 Abela said her novels had their own personality and likened them to being child-like. ‘Some (stories) come roaring out… like in The Spelling Bee. It was a delightful, playful gorgeous thing and it sort of wrote itself.’

However, Grimsdon was her naughty child. ‘No matter how nice I was to it, it would not behave. It felt like I dragged every single word out of some word rock.’ Her editor advised, ‘Just write one paragraph at a time, one page at a time and you will get to the end.’ Like Grimsdon, Abela appears to have a delightfully devilish streak in her as BookLinks co-ordinator Yvonne Mes found out.

Abela explained the elements using the cake baking analogy.  ‘At the very, very beginning, your story needs the three basic ingredients character, setting and problem.’ Put these three elements into the plot pot… take those characters, put them into an interesting setting… then we make as much stuff go wrong for them… .’

Know your characters like you’ve met and are getting to know them. Make them interesting, especially if ‘you’re asking kids to hang out’ with them for a whole novel or series.

Your setting is the same. “The single nicest thing a kid has said is, ‘I felt like I was in that book.’ It means you’ve done it. You’ve created a world and you’ve created kids that feel real. And that this (world) could possibly exist. No matter your world, whether soccer fields, haunted castles or World War II it must be authentic.”

Know what your characters want, then create problems to achieve it. ‘What is the thing your character wants the most? It’s usually numerous things, but what is the one thing driving that character? For India Wimple in the Stupendously Spectacular Spelling Bee, what she wants is to win the spelling competition.’ But first she wants ‘not to have that feeling of throwing up in front of a group she doesn’t know.’ The things you throw at your character must be hard to get, but not impossible. And it mustn’t be frustrating for the reader. 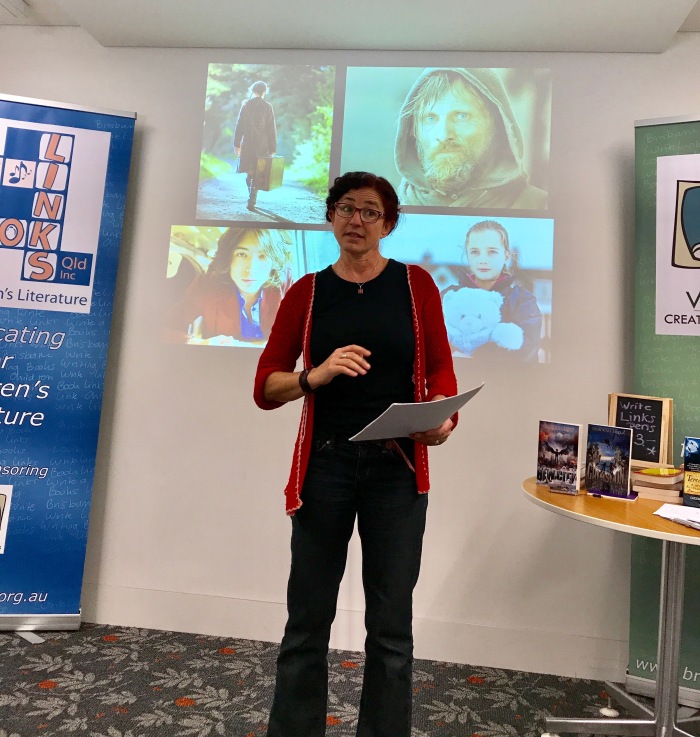 Voice in Your Head

Abela found a way to silence the ‘voice in your head’ that often reminds you how bad you are. She learned to become so involved in her characters and their story, that it felt like she’d forgotten the ‘voice’ was there. ‘I ignore it. I don’t give it permission… I haven’t got time to listen to you… I’ve got a city to flood or I’ve got some kids to rescue… so get out!’

The drafts goes through several stages – from a solid foundation to build your story on, to making sense, to rewriting, to fine tuning and then finessing. Grimsdon went through at least 3-4 drafts before sending it to the editor. 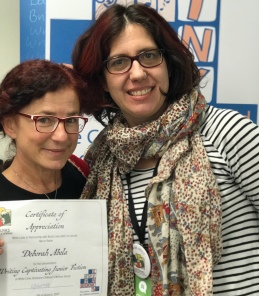 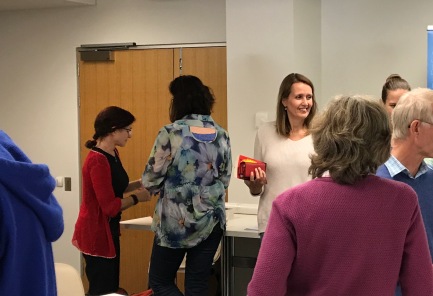 In Grimsdon, her editor showed Abela how close she was to her characters and story. When the editor said, ‘I know why you like this character… I don’t know why I should.’ In her rewrite, Abela had to transfer her passion for her character to the reader so they’d have more empathy. ‘No matter what you write, you must be passionate about what you are writing.’

Avenue of Pines. #paronellapark #pines
Dragonfly glistens🍃
✨May 2020 be the start of much kindness and friendship. It started as one photo on Christmas Day 25.12.2019. It lead to a series of photos. My son’s facial expressions are worth the post.🍃 Pics 9 & 10: myself and Kerrin in 2019 and 1990 are appx 29 years apart - priceless.✨
Two days in the now beach walking.
Great granddaughter and great grandmother, nina.
Moki my family’s Rottweiler pup who loves snuggles. #pup #rottweiler #dogsofinstagram #dog #snuggles #thoseeyes #eyes #cutenose #makemyday
A little girl and her curls✨
An egg. More specifically, an egg laid from my Mum’s chooks. #chooks #hens #egg #eggshell #organic #freerangeeggs #freerange #eggsofinstagram #eggciting #photooftheday