Anita Heiss, author of 16 books – her latest ‘Our Race For Reconciliation’ covered three main topics during her Year 4 students’ workshop. Who did they admire? What made a good friend? What things would you say sorry for?

The students shared their heroes and sheroes. That one special person in their life they admired and aspired to. Someone they could learn a lot from and would like to be more like. Some answers included — their Mum, an Uncle – a war veteran, a person who made changes using peace rather than war, football player and Andy Griffiths. Heiss, herself, aspired to author and poet Oodgeroo Noona (aka Kath Walker) of the Noonuccal people, Stradbroke Island. Also author Doris Pilkington Garimara AM, who wrote ‘Follow the Rabbit-Proof Fence’ which was adapted into the movie ‘Rabbit-Proof Fence’. And Wimbledon Tennis Champion, Evonne Goolagong Cawley, MBE, AO who wrote her best selling autobiography ‘Home!’ Heiss said of her sheroes, ‘I wanted to be a writer like them and write stories for kids to read.’

Students shared their ideas on, ‘What does it mean to be a good friend?’ Be helpful, friendly, offer to help, loyal, look out for each other, treat with respect, be kind, encourage your friends. ‘Don’t be toxic’ was an impressive answer from a 9-year-old. Surround yourself with positive friends. It was healthier than being around those who could ‘suck the life out of you’. It was Heiss’s good friends from the Northern Territory AFL who ran her over the line in the 42.2km marathon (further than Ipswich to Brisbane). She had Uluru as her constant companion during the 5hrs 43mins. But, it was Olympian Cathy Freeman who inspired Heiss to run her first marathon. 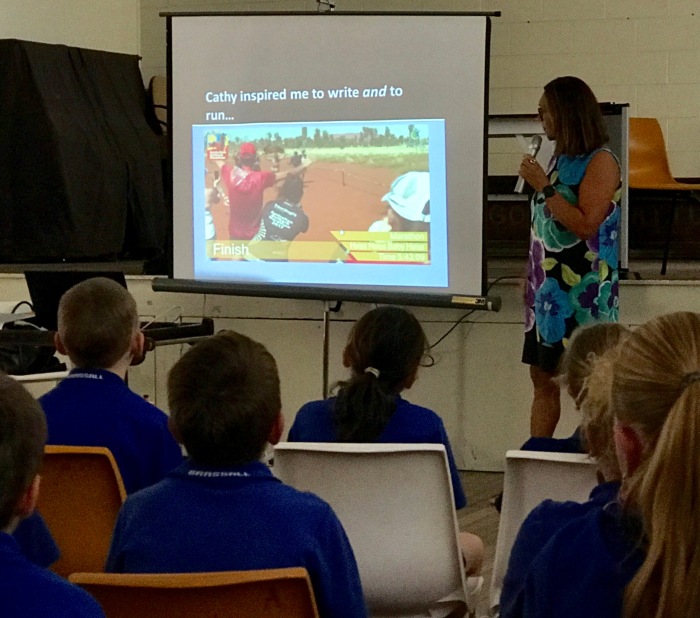 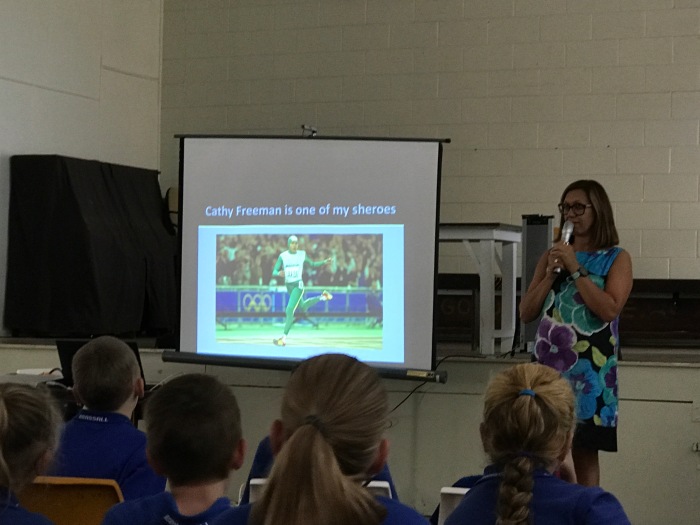 Students also shared how they’d introduce their friends to others. This is my… friend, best friend, bestie, BFF, mate, buddy etc.,  ‘Tiddas’ was how Heiss introduced her female friends, who were like sisters. You could also have friends who liked different things and the same things to you. One mate may like running, while the other preferred dancing. However, they both could like ice-cream. If that was the case, support your friends and watch each other run or dance. And enjoy ice-cream together at the beach, park etc.,. 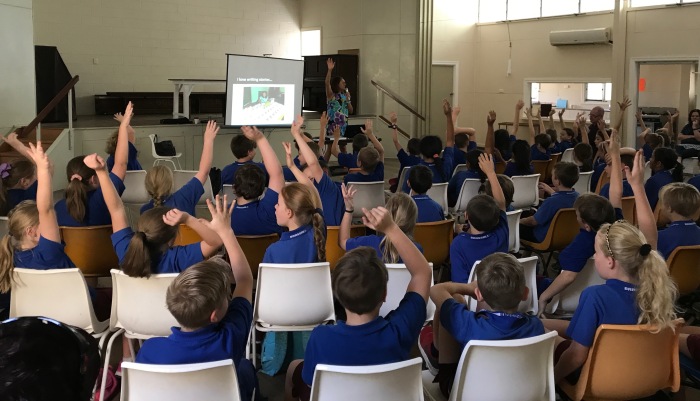 The last concept students worked on was, ‘What things would they say sorry for,’ If they hurt someone, pushed them or bullied them on purpose. Heiss commended those who could recognise if they were bullying and were able to say, ‘I’m sorry for being a bully.’ However, instead of doing something on purpose, Heiss asked, ‘What if, I accidentally bumped someone. I wouldn’t have to say sorry?’

‘Why do I have to say sorry because it was an accident?

Because it showed — you didn’t mean it, you are nice, caring, you respected them because you hurt someone by accident.

Then Heiss asked, ‘What would you say if someone was sad because their pet had been in an accident?’ ‘I’m sorry your pet is unwell.’ It showed you never forgot about the pet. To accept a person’s apology makes us feel better. And it showed you understood or had empathy for how they were feeling.

Heiss added, ‘We can move on and forgive. It is a lot like reconciling. It means we’re bringing people back together again.’ When you’ve had a fight with your brother or sister (or friend), you’d say sorry. ‘We come back together… we have a reconcile…we have a reunion. It helps people move on.’ 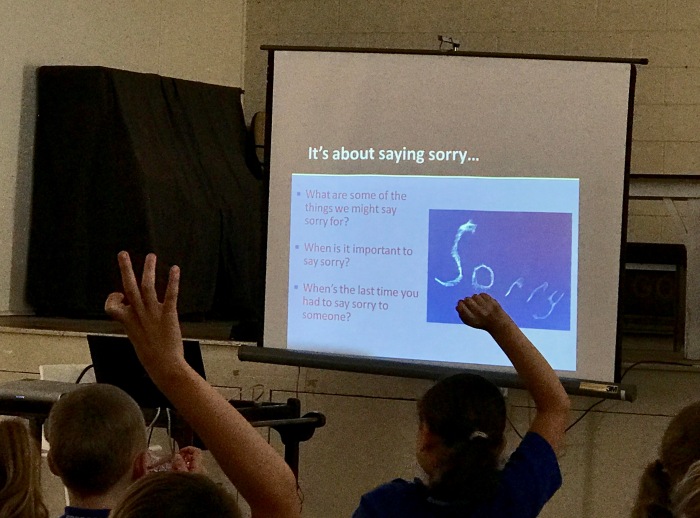 Heiss’s latest book ‘Our Race For Reconciliation’ was inspired by Cathy Freeman’s 400m Gold medal race at the 2000 Sydney Olympics. She asked students to view the You Tube clip with no sound. They had to imagine what Cathy Freeman would be feeling and thinking — before the gun went off, while running, when the race was over and after winning Gold. 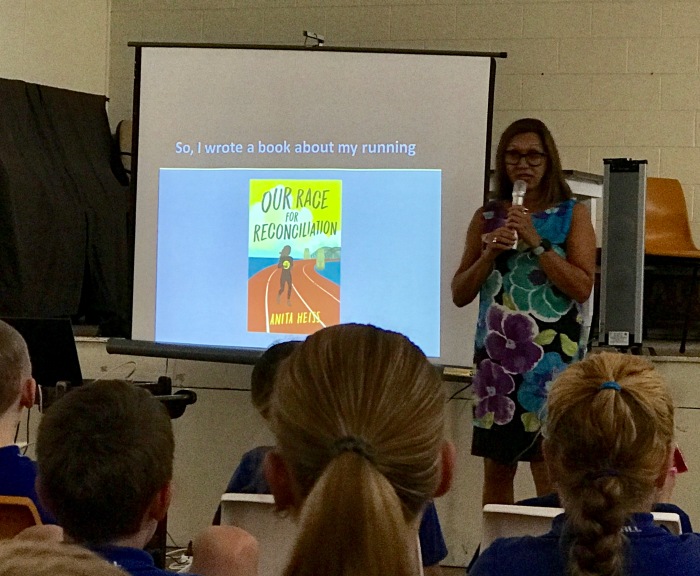 Year 4s offered excellent emotional examples like nervous, worried, excited, happy, exhausted, sad and relief. This was how Cathy Freeman felt from her interview, as it was her dream to win the Olympic 400m race. Leading in, she’d run that race over and over in her head until it brought her to tears. To focus during her warm-up, she repeated four simple yet powerful words. ‘Do what I know. Do what I know.’ When she finished that race she wasn’t sure what had just happened, but she felt a wave of emotion because she’d achieved something she’d waited a long time for. 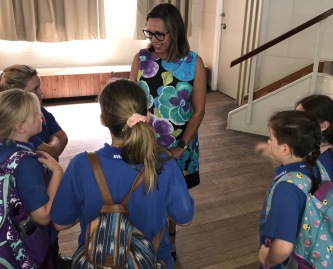