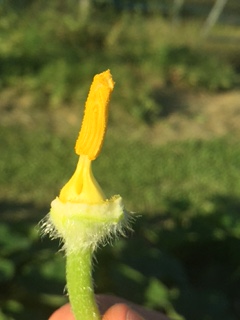 The pumpkins had a bumpy start to their success this year. Bees were late arriving and it appeared there were not enough of them to fly around to all the  pumpkin flowers. My brother and his wife have a bit of a green finger. So I got the low down on how the pumpkins were pollinated. It was an enlightening lesson on ‘sex in the pumpkin patch’. Through trial and error they finally found the magical pollinating solution.

“I first used a paint brush to dust the female pumpkin flowers but that wasn’t sterile enough.

Next, I broke off the male flower, with a single yellow stalk inside and each morning when all the flowers opened, I brushed the male onto the female parts.

If the flower stays green and grows then it’s set. But if the yellow flower drops off, it has not been pollinated.”

It was a tricky process, pollinating by hand each individual female pumpkin flower, but one which worked. I was amazed when they showed me the process. They were rewarded with a very good crop of pumpkins which they shared with family.

“We’ve had pumpkins weighing up to about 6-7kg. That’s a lot for one pumpkin.” 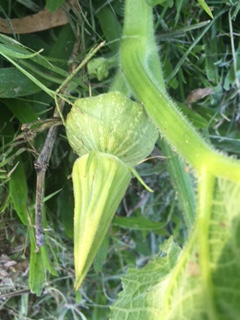 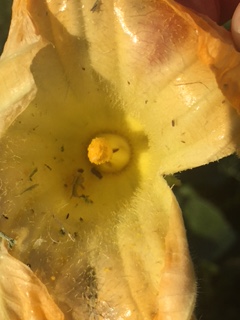 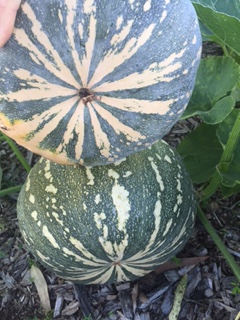 Cloudy appearance above is ready to pick. 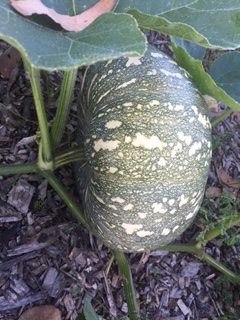 For pumpkins to pollinate they need bees or a helping hand. Two types of bees which would normally pollinate the pumpkins: the European Honeybee which are bigger and bite, and the Australian small black bee which don’t bite.

Also you can tell when the pumpkins are ready to pick. They start to get an external cloudy appearance as the one above left. I have learned so much about pollinating pumpkins that nature continues to fascinate me.

20 thoughts on “How to Pollinate Your Pumpkins?”

Sun setting on my walk - March 2017, 6:05pm. #sunset #brisbaneanyday
The Wedge-tailed Eagle is one of 24 diurnal (day-active) raptor species in Australia. Like other birds of prey, it has a hooked bill and large talons. It can weigh 4kg, measure 1m from head to tail-tip and has a wingspan of up to 2.3m (females are larger than males). https://www.bushheritage.org.au/species/wedge-tailed-eagles
My son Kerrin and Arnie. Had a relaxing Christmas Brekkie at Nonna’s place on the farm. He said it was made more special having his three favourite women with him. Can’t argue with that💝
Two of my nieces on Christmas Day.🌸💕🌸
Mating season for these two black and white butterflies. Watch how fast the male’s wings flutter and then for his yellow male part appears. Can you identify these butterflies? #butterfliesofinstagram #butterfliesoftheworld #butterfliesmating #butterfliesofinstagram
Sunset. #sunset #mindfulness #love #sun #water #earth #sky #couple #brisbane
Take a minute. Be the slow boat on the river when you need to. Find a piece of nature. Share your minute #takeaminute #takeaminutechangealife #mindfulness #mindfulliving #nature #healthandwellbeing
Today, take time for you. See, breathe, smell, feel, hear, sense. #mindfulness #breathe #nature